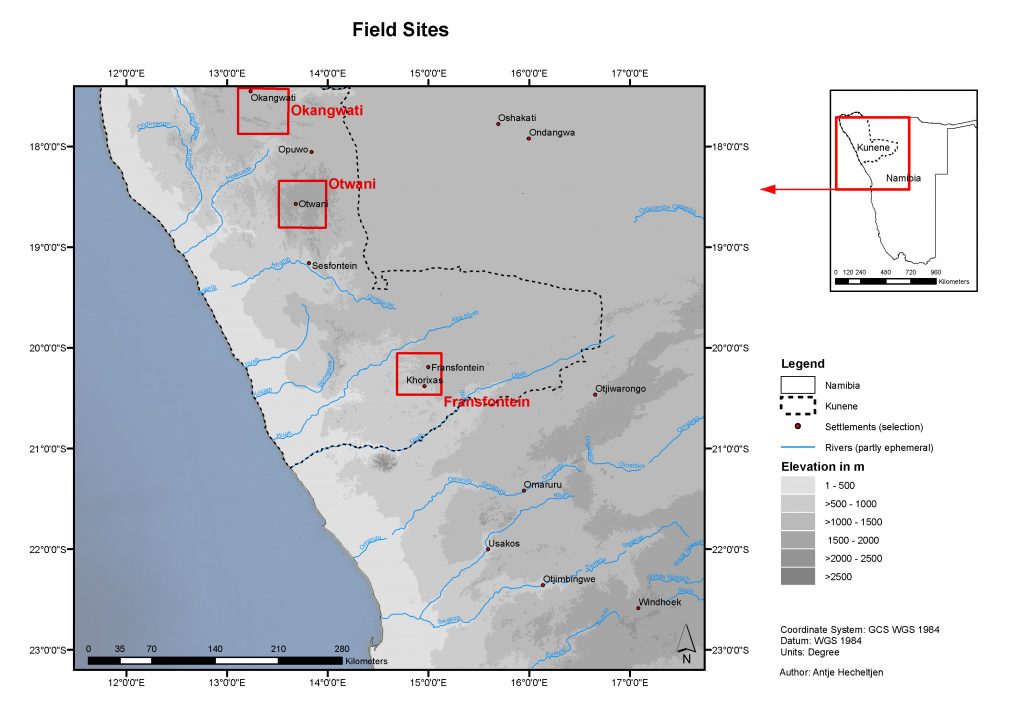 The Kunene Region covers an area of 114,293 km² – approximately 13.9% of the total land area of Namibia – and is sparsely popualted. Annual rainfall increases from west to east, from less than 50mm near the coast to up to 415mm in the south east. Most of the rainfall occurs in summer, mainly between November and April. With a few exceptions, such as the Kunene River, the majority of the water sources are not perennial and the rivers flow only during heavy rains. Groundwater is thus the most important source of water used in the region.

In Kunene, as elsewhere in the semi-arid rural areas, dependency on natural resources, especially on land and water is high. Apartheid and colonial legacies, the resulting unequal distribution of natural resources, a harsh climate and recurring droughts, as well as restricted economic opportunities and intensive labor migration create challenges for institutional reforms.

During colonial times, especially in line with the expansion of the apartheid policy in the 1960s and 1970s, boreholes were drilled on a grand scale in the so-called homelands in order to turn more land into accessible grazing grounds. Until independence the state played a crucial role in water management issues, since the infrastructure (wells, pipes, pumps, etc.) was provided and maintained by the South-West African administration – centrally and as part of a decentralized homeland administration.

After independence, mainly during the second half of the 1990s, substantial political reforms restructured the rural water sector.  Changes were expected to support a more equal access to water as well as to promote participation, empowerment and democratization. In line with these ideas, financial and management responsibilities for the water infrastructure were transferred to rural communities and “community-based management” was introduced in hundreds of pastoral settlements. However, the process did not lead to the expected results and our research reveals that in many cases, the implementation of community-based management caused social conflicts and resulted in substantial costs especially for the most vulnerable households.